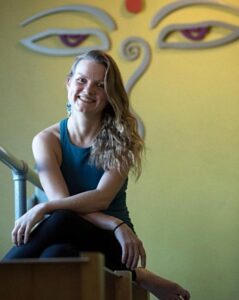 I began doing yoga sixteen years ago at yogaview when my friend bought me a five pack. I took a Level 1 class with Mary Schmich, and then a few more. I liked it, but it was challenging. I wasn’t flexible. I wasn’t strong. But yoga calmed me down and gave me a bunch of constructive stuff to work on. In college I found a studio and yoga teacher I loved and began planning my classes and social life around yoga. I did my teacher trainings after college about ten years ago at yogaview, not to teach, but to learn and deepen my own relationship with my self.

My style is alignment and engagement based. I prefer to work really hard in basic poses rather than perform impressive ones. My body is mobile and it took me awhile to understand just because I can do something doesn’t mean I should. All of that is reflected in my teaching. There is always more yoga, and if you want to come back again to the mat tomorrow or the next day, your asana approach has to be sustainable. That being said, my most influential teachers have been at yogaview coming from the Anusara days: Geri Bleier, Dorie Silverman, and Sara Strother.

I would make yoga more inclusive and accessible.  Everyone can benefit from yoga, but not everyone is able to.

Yogaview is a special place for me. It feels generative and supportive in so many ways. I worked at the front desk, did my teacher trainings there, and now I am the studio manager behind the scenes. I appreciate that yogaview has something for everyone. We are offering some of Chicago’s best yoga and I’m thrilled to be on the faculty contributing to that.

Given how many light bulbs I change at yogaview, I am often very close to the top rung of the ladder! To me, Samadhi can be described as heartbeats in which we are truly where we are and no where else. We might be rubbing our dogs belly, with our beloved, or pushing up to urdhva dhanurasana, but we’re fully doing exactly what we’re doing.

What was one of the funniest or most humbling moments you’ve had while teaching a class?

Maybe seeing my Dad do handstand the first time? I was super proud that day and continue to be each week watching him in my classes!

In less than 140 characters, describe your inner experience going about daily life pre vs. post developing a regular yoga or meditation practice.

That really resonates with me. I often think of my life largely in two separate distinct phases: preyoga Lisa and postyoga Lisa!

Postyoga Lisa can focus and is a bit more chill.

If there was one teacher or guru that you would desire to study under (dead or alive) who would it be?

Riding my bike! I don’t own a car, and don’t think I ever will as long as I live in a city like Chicago. Biking has so much in common with yoga and meditation. You have to pay attention to whatever comes up in the moment. Even when the route is the same, the body, mind, and elements are constantly in flux.