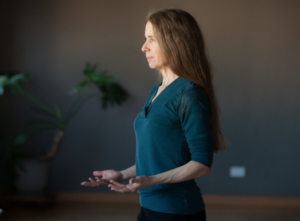 The summer after I graduated from college, a friend gave me a copy of a little paperback called “Richard Hittleman’s Yoga: 28 Day Exercise Plan.” This was in California in the mid 1970s, long before yoga was the mainstream cultural phenomenon it is today. It was the first I’d ever heard of yoga.

The book showed a long-haired woman in a leotard doing a variety of poses and promised “years of perfect health, lasting beauty and enduring peace of mind.” Who could resist that sales pitch?

So once a week or so, usually around 1 a.m. after being out with friends, I’d come home to my studio apartment, open the book on the floor and try to follow the directions for a pose or two. I was especially fascinated by triangle pose.

That early flirtation with yoga was interrupted a year later when some guys I knew asked if I’d like to start running with them. The running trend had just begun and though I was even less likely to be a runner than to do yoga (I’d never been athletic, despite time as a pom-pon girl) I tried it. I loved it, and I took to running long distances every day. I totally forgot about yoga.

And then on New Year’s Day 1994, I sat down in a Chicago coffeehouse with a yellow legal pad to make my new year’s resolutions. I stared out the window at the snow. I’d been running hard for nearly 20 years and while I still loved it, I felt my body—and my mind—needed something else, something that would open me up. I wrote down the number “1” on the paper, followed by “Do yoga.”

Why had I written that? What did it even mean? I didn’t know. There was very little yoga in Chicago at the time but I found one of the few studios, signed up for an intro course and from the very first class felt I’d found something that would change and guide my life.

At first, I went to class only every three or four weeks, and that felt like plenty.  A while later, during a period of crisis, I started going several times a week. By the time the crisis had passed—as crises always do—I’d developed a habit that for almost 25 years has been a friend, a tool, a form of play and a way of thinking about how to live.

I’ve studied almost every style and what I teach reflects that wide-ranging experience. I started with Iyengar, which gave me an appreciation of alignment. After a couple of years, I moved to Ashtanga (the precursor to what’s now called vinyasa flow). I learned from them both but it wasn’t until I studied with Erich Schiffmann that I began to feel the practice in the way I now understand it—not as a set of rules but as a form of self-expression.

I’ve done teacher trainings with Erich, Ana Forrest and Aadil Palkhivala,  but how I teach and practice has as much to do with all the not-so-famous teachers and yoga friends I’ve practiced with through the years. Chief among them are Tom Quinn and Quinn Kearney, who founded this beautiful studio.

I think all you have to do is walk into the studio to sense why. It’s built on generosity and love. Its spirit reflects its founders, Tom and Quinn. I met them 20 years ago and when they decided to open their own studio and asked me to teach, I felt it was one of the luckiest things that had ever happened to me. I still feel that way, which is why I’ve taught my Sunday class ever since the studio’s opening day.

If there was one spiritual teacher or guru that you would desire to study under (dead or alive) who would it be?

I think we can find our teachers all around us. The truest yogi I ever met was my mother, who raised eight kids, had a hard life and never did an official yoga pose. But she embodied yoga—the curiosity, the resilience, the open-heartedness, the fascination with the mysteries everywhere.

Making music on my piano or mandolin.

How has your work as a columnist and writer influenced your yoga teaching and practice?

Yoga and journalism are more alike than is obvious. They’re both explorations of the world, a means of expression. They’re investigative: How does this pose work? How does life work? What does it all mean?

Here’s something I often say to myself, about yoga and life in general: Work less, breathe more.