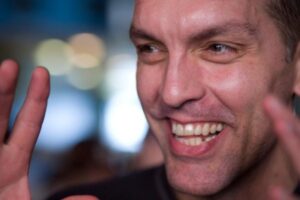 I think it was 1993.  I was in graduate school, battling depression, and in a lot of pain–although I didn’t realize how much at the time.  One day, I was taking a nap and my back seized when I tried to roll over in bed.  I was in so much pain I could barely breathe, but I managed to call a friend who was also a massage therapist and beg him for help.  After a life-saving massage, my friend said, “I think we should try yoga.”  How could I say no?  My friend and I enrolled in a beginner’s yoga class at Sivananda and…five years later…I realized I had done yoga nearly every day since my first class.  It wasn’t just the physicality.  I loved the (gentle, non-insistent) way teachers encouraged students to think about asana as not just embedded in but also constitutive of an approach to living.  And most of all, I really loved the community–including the standing invitation to stay for vegan dinners after class! It’s been more than 25 years, but I still love running into friends I first met in that dingy little studio on Bryn Mawr.

After a few years at Sivananda, I wandered into a “vinyasa flow” class with another friend. I was shocked! The class started standing up (Sivananda classes start with headstand!) and, more alarming, there was music!  But the teacher was super-clear, the sequence playful, and by the end, although I wasn’t sure I’d go back, I was less…scandalized!  It’s all pretty hilarious looking back.  Of course, I not only went back but came to love the creative way vinyasa teachers approached their classes.  I missed the vegetarian meals…but I delighted in the sometimes unexpected ways vinyasa teachers helped students explore familiar poses and sequences.  For the second time, I was hooked.

I don’t think a lot about “style,” but, if pressed, I’d describe my style as sanely eclectic.  Blame Quinn Kearney…and Tom Quinn…and Claire Mark…and Geri Bleier!  I learned so much from all of them, but most importantly I learned that no one tradition has a lock on the truth or on the best way to teach asana or yoga philosophy.  I also learned that not everything makes sense.  So, I borrow widely, but always with an eye to sequencing and cueing in ways that make sense not just for people’s bodies but also for their brains, because our habits of thought are as enabling and limiting as our physical capabilities and limitations.  I cue both the breath and physical alignment–but I don’t think either breath or alignment alone are adequate for the practice.  What is?  Although I haven’t practiced with her in years, I am still profoundly influenced by Geri Bleier’s oft-repeated declaration that, as yoga teachers, “We want people to feel good.”  It’s easy to dismiss that as a cliche, but it really isn’t.  I want to teach in ways that make people stronger and more flexible.  But, most of all, I want to cultivate delight and that shock when you realize that you haven’t thought about texting or checking your email in 75 minutes because you’ve actually been in the moment.  What else is there??

No. More. Gurus.  For all sorts of reasons, I am deeply uncomfortable with the “national teacher” phenomenon.  To be sure, there are some teachers–Richard Freeman, for example–who teach by their very presence.  But…can we just leave it at that? At the risk of suggesting that people not take my classes, I’ll quote Van Morrison (and Jiddu Krishnamurti, who he was referencing): “No guru.  No method.  No teacher.  Just you and I in nature.”  (The song I’m quoting is Morrison’s “In the Garden;” take a listen!)  We all have favorite yoga teachers–and I’m fine with that.  I’m troubled, though, when people identify one person–or even a group of people–as being purer, more authentic, or more devoted to yoga than others.  Krishna instructed Arjuna to find a teacher. He didn’t specify a particular approach or tradition.  Why should we?

Why do you love teaching at yogaview? *Specifically in Wilmette?

yogaview isn’t just a place.  It’s a kula, an intentional community in which people delight as much in each others’ presence as in their physical accomplishments on the mat.  I begin almost every class by asking students to introduce themselves to people they don’t know; to acknowledge that our practice isn’t just about us but about our connection to the world around us.  That’s the beginning–and the essence–of our practice.  If you look around before the start of any class at yogaview (lots of places probably, but definitely at yogaview) you’ll see old friends reconnecting, new friendships forming, and all of it nurtured by a deep and abiding love of yoga.  Enough said?

I’ve experienced profound moments of quiet in my practice, but I don’t think it’s possible to experience samadhi as a mortal being.

What was one of the funniest or most humbling moments you’ve had while teaching a class?

A few months ago, near the end of one of my classes–I think we were setting up baddha konanasa–one of my students kept mouthing something to me.  After a couple failed attempts at communication, I finally said “I don’t understand,” at which point she said, loudly, “There’s a hole in the crotch of your tights!”  Luckily, I hadn’t gone commando that day…but the entire class dissolved into giggles nonetheless!  I now religiously check my tights for holes before leaving the house…